BladeSports International brought five of their competitors to Waxahachie, Texas on Saturday, September 27, 2014.  The event was hosted by Boyce Feed and Grain in historic downtown.  Mississippi custom knifemaker, Donovan Phillips led the cast of competitors. Donovan is sponsored by Spydeco and is a mainstay on the cutting competition circuit. Not only is Donovan the reigning National Champion, but he was the 2010-2012 overall points leader and National Champion.  Ted Ott of Elgin, Texas was also in attendance. Ted is sponsored by Benchmade and is a past world record holder in the 2×4 speed cut by cutting a 2×4 in half in 1.845 seconds.  Gary Bond also competed.  He is a lifelong resident of Waxahachie and was the World Champion in 2008.  Gary was the only World Champion to compete.  Custom knifemaker Dwight Schoneweis of Arlington competed, as well as a custom knifemaker from Mississippi.  Although I was late to the event and missed the competition, it was great to talk with all the competitors.  All five stayed around until 2:00 p.m. teaching locals the cuts and knife safety.  It was a great event for Waxahachie. Thanks for all those that participated.  (my bulldog “Fifi” made the group picture) 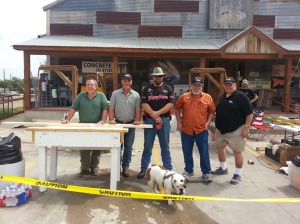 I am an Assistant District Attorney the Dallas County District Attorney's Office. On November 20, 2017, Comedian Bert Kreischer inspired me to start a weight loss journey. I started the journey at 475 pounds. Through Bert's support, Professional Wrestling Hall of Famer and Fitness Legend, Diamond Dallas Page, I reached changed my life. DDP Yoga and Nutrition helped me lose over 240 pounds and increased the quality of my daily life, every day. It is my goal to inspire 10,000 people to lose 200 pounds. If successful, I will help remove 2,000,000 pounds from this planet. Another way to say 2 million is 1,000 tons (10,000 x 200). Hence the name, 1K Ton. Welcome to the 1K Ton Goal Project. Vance
View all posts by 1K Ton Goal Project →
This entry was posted in Uncategorized. Bookmark the permalink.